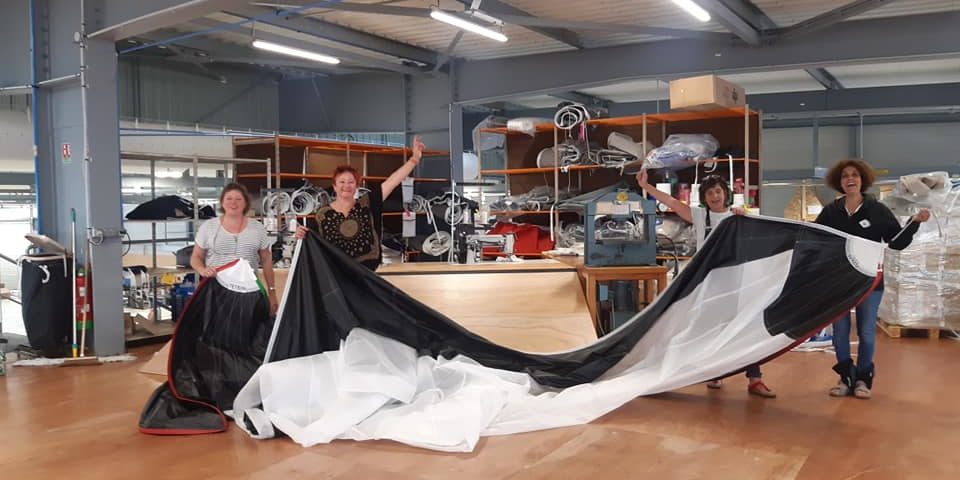 The mini circuit is synonymous with creativity as well as mutual support, learning and sharing : This is precisely what Hélène Clouet alongside the Incidence Team had the pleasure to discover.

Hélène Clouet has just began sailing the second leg of her « Mini ». Among the sailors equipped with Incidence Sails on the Mini Transat, the young engineer and oceanographer who became sailing instructor has been given special attention by the entire Incidence team. Hélène has indeed spent a part of last winter in Périgny mainly to participate in the making of her own sails, the spinnaker and mainsail…

DIY: I have learned a lot

Hélène: « I have worked for the last 2 months at Incidence on a short term contract and knowing I was preparing for the Mini Transat and that I needed a Spinnaker as well as a main sail, many people told me that I should take this opportunity to make my own sails. I mentionned the idea and… it finally happened! It was awesome!

I was lacking experience to do everything on my own, but I was able to prepare and assemble the Spi. The sewing was done by the girls: they wanted to do it themselves as it was more efficient. The would stay at the end of the work day to help me… once again a big thanks to all of them.

I then helped out in the finishing.

« From the moment I arrived at Incidence, I was warmly welcomed. I was supported by everyone from the beginning and everyone helped me. It was humanly very enriching; I learned a lot and this partnership helped me to build new sails with a small budget. I would have never thought it could be possible at the beginning!

Whenever I have a question, Arnaud, Charlie were always there to give me some good advice, I was very lucky!

Arnaud Seite, designer: « Hélène succeeded in pulling the whole team around her.  Everyone helped her, it was a real pleasure to be part of her project ».

Among other « Mini » sailors equipped with Incidence sails, Jay Thompson (#Cocotopia) and his home-made foiler, finished in 9th position with his prototype in La Palmas!

We have the pleasure to support Estrella Lab!
9 November 2021
Les derniers articles
Go to Top